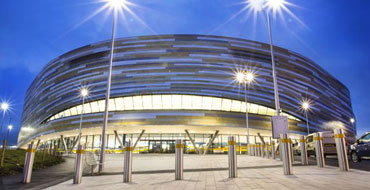 Derby’s futuristic Arena has received the top accolade at the East Midland’s Property Awards. Dubbed the ‘Golden Dome’ by many in the city, the building was one of the first Olympic legacy projects to be completed outside London.

Designed by Architects Faulkner Browns, and at a cost of £27m, the 14,500m²Arena houses one of the five national standard 250m indoor cycling tracks in the country.

Going round in circles, but getting straight to the point

Smoke and Fire Curtains were commissioned to design and manufacture a bespoke fire barrier system, providing 240minutes of fire protection and restricting the lateral spread of fire and smoke allowing for a timely evacuation.

The FireSafe 240 system was designed to remain concealed within the ceiling void, until activated by the building BMS facility whereupon it will safely and reliably deploy under gravity. The system provides an effective compartmentation of smoke and fire and a protected means of escape.

Smoke and fire curtain systems are widely recognised as an alternative or an enhancement to fire doors and sprinklers, giving architects the freedom to design large open plan spaces.